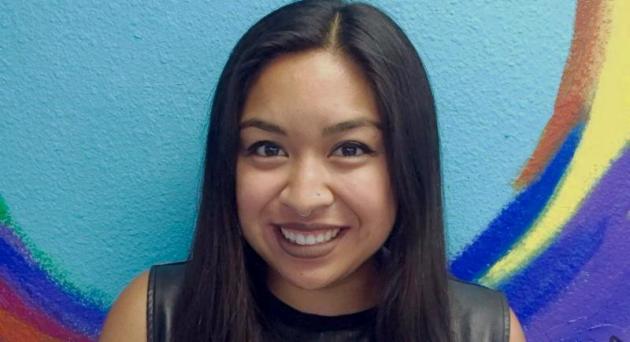 A few months into Sam Castro’s time as an AmeriCorps Public Ally in Phoenix, Arizona, tragedy struck a nearby high school. Two young women who had been romantically involved died in a double-shooting. The event shook the campus, and unfortunately attracted attention from anti-gay activists who chose to protest outside the school while students and faculty were still in mourning. Sam had been serving her apprenticeship with the organization one•n•ten, a support organization for LGBTQ youth, which was invited by school officials to help create a Gay Straight Alliance club on campus, to enable students to feel safe expressing themselves.

For Sam, who holds a Bachelor’s degree in family and human development, this was the kind of work she was passionate about. As a young woman, she had to face her own challenges in coming out as queer. In this Q and A, Sam talks about her leadership journey as an advocate for the rights of LGBTQ people.

Q. Tell us about yourself growing up.

A. I moved several times growing up, so most of my life it was hard to find confidence and stability within myself. I was raised in a traditional, Catholic and Filipino household, and I was very quiet and reserved. Moving to California helped me step out of my shell and truly find myself and my voice. I was class Secretary for Student Government, as well as editor for both the school newspaper and daily video news.

I’m sure my parents would say that I was rebellious growing up because of how strictly they tried to raise me and because of the obstacles I went through with coming out. I was an adventurous teenager who wasn’t afraid of taking risks, and with my parents being immigrants from the Philippines, they were conflicted about how I should present myself because they were not accustomed to American culture. Most of the dreams I had at that age involved helping others and traveling around the world.

Q. What was it like coming out to your friends and family?

A. I definitely felt a lot of pressure and anxiety in terms of coming out. When I was younger, I suffered through a lot of internal homophobia before I accepted the fact that I was queer. I always had attraction to masculine genders but it was when I was in middle school that I realized I was attracted to feminine genders just as much, if not more. I would consistently lie about the women I dated, as well. While my friends were accepting of this part of me, my parents believed it was a phase of confusion, and that I was being influenced by others. I believe coming out is an everyday process for people who don’t follow the heteronormative structures of society. The pressure of validating or explaining my sexuality is something that I will always have to overcome.

Q. There was a tragedy that happened at a high school you worked at while you were serving your AmeriCorps apprenticeship. Can you tell us what happened?

A. It was unfortunate that two young students in Phoenix faced difficulties in their lives regarding their personal identities. I can’t go into much detail, out of respect for the two young women and their families, but the situation resulted in their deaths. There was a lot of negative publicity and anti-gay protestors showed up at the ladies’ school following that day. It made for a very solemn and unwelcoming vibe for those at the school still mourning.

Q. What role did you play at the school after the tragedy?

A. After the tragedy, I had the chance to visit and speak to the students and the Gay-Straight Alliance sponsors about their feelings towards the situation. I introduced the class to one·n·ten’s safe-space guidelines, which is a list of rules we abide by that guard and encourage each person’s self-respect, and the respect of others. I also explained the services that my placement offers, and the many ways they can benefit from the resources we provide. Additionally, I offered advice and team building strategies on how to maintain solid connections among the GSA members. It was my goal to give them tools to help form their new GSA, and empower them to embrace their uniqueness.

Q. You seem to be a strong role model, not just for people of the LGBTQ community, but really anyone.

A.It is an honor to hear that I have been a strong role model for some, although I definitely have not always been this way. I had a lot of suicidal tendencies when I was younger, and suffered a lot from depression, substance abuse, and self-harm. I used to feel very inadequate, and sometimes I still can, but I’ve learned that the things I was ashamed of about myself are actually things I should be proud of. Really, my resilience to move past those dark moments is what helps me find my self-confidence.

Q. What is one thing that society needs to change for our LGBTQ community, and how do you see yourself playing a role in it?

A. A huge thing that society needs to change is the stigma that is directed towards individuals in the queer community. It is the discrimination and alienation of LGBTQ individuals that instill the fear of coming out in young people. Every day, I see youth like myself getting kicked out or running away due to their identities. Our well-being as adults is highly influenced by the way we are brought up in our youth, and if our kids are facing barriers to housing, education, resources and health services at such a young age, it makes it harder to achieve self-confidence and overall success.  I see myself playing a role in this change by educating others on the importance of inclusivity and acceptance. With gay marriage being legalized, as well as a lack of education on LGBT matters, a large portion of people don’t realize that there are still discriminatory laws in place, or that there is a lack of laws protecting against discrimination based on gender identity and sexual orientation. Subsequently, people aren’t aware of the amount of exploitation and violence that the queer community faces. I am aiming to bring these issues to the face of society and hopefully lead people to be the change the LGBTQ community needs.

Q. What do you think are the best ways to bring these issues to light?

A. Education is important to get messages across; I want to pursue my work in the social sector and continue advocating for the LGBTQ community whether it be through outreach, working for policy changes, program coordination within organizations, counseling LGBTQ youth, facilitating educational workshops on LGBTQ matters, and more. I see myself playing a role in being the change that society needs by continually being the voice to educate those who are unsupportive of the community, or simply unaware of LGBTQ issues and risk factors that our youth may be facing. Regardless of anyone’s beliefs, it is important to use inclusive language and behaviors, and to know how to provide LGBTQ youth with safe spaces within the school, workplace, and home. Through my work, my goal is to continue helping my LGBT brothers and sisters in their journeys, as well as educating our allies on how to effectively support our community and the development of queer youth.

Q. What is your next step, and your future goal?  Will it involve more experience like this, in either a nonprofit or in LGBTQ support?

A. I definitely see myself remaining within the nonprofit sector, but anything within social services is my aim. There are many underserved and oppressed communities I would love to offer support to, such as those who suffer from homelessness, mental health issues, substance abuse, and more. But, within serving those populations, I know I will never stop focusing on my LGBTQ community.